The Tootsie Sister on Ice 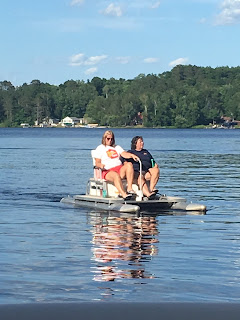 I got a message a few weeks ago from the sister of my friend, my lifelong friend, you may know from a previous podcast, as the Tootsie Sister. The message said my friend had fallen on the ice and broke the leg that she had just recently had total knee replacement on. She would be having extensive surgery and would be in the hospital for a while. With Covid restrictions, hospitals are not allowing anyone to visit patients these days. So I did the next best thing and texted her. I asked her how she was doing, when she was getting out, the usual questions. Replies would come back a little at a time. To say the least, my friend was pretty groggy and drugged up and in lots of pain. Between spell check and her on heavy pain meds it took some deciphering, but she let me know she was in pain and wanted to get the heck out of there. She wanted to get home to her husband, own house and her dog, Frank. She was there several days and finally was allowed to discharge home. She was not going to a nursing home under no circumstances and would just figure out how to get up her steps and in and out of the tub and shower with some home health assistance from a homecare service. I finally had a chance to drive down to see her recently at her house. And as always, we picked up the conversation where we left off several months earlier. She described falling in her driveway and lying on the wicked cold ground not being able to get up. All the while her best canine friend, Frank, stood guard straddled over her. A neighbor had seen her and came running over. Realizing she couldn’t get up, paramedics were called to come assist her. They came and found my friend lying in the icy driveway freezing her bottom side off. She told me they were going to give her pain meds and had started an IV. They asked her what her weight was. She told me she wouldn’t tell them because by now several neighbors were within earshot. And there was no way she was going to give out that information to her community. Not that my friend is overweight, she is really tall though and her weight would reflect that and not a normal 5’4” woman. So the paramedics kind of dosed her by guess and by golly and were able to get her transported to the hospital. Surprisingly she didn't have any frostbite from lying there so long. She has been out of the hospital a few weeks and is getting PT and assistance with her daily routines. She is on the mend doing well. Her attitude is one of glad to be home, wanting to heal up and get on with life. It is a slow process. We had a good time meeting up once again. I brought Culver's burgers, fries and shakes for lunch. We ate and chatted and then went and sat by the fire. Her in a recliner and me in a comfy overstuffed chair, with Frank sitting in front of me getting his ears rubbed and dozing off. It must have been quite a picture, two old battle scarred friends sitting side by side in front of the fire chatting about falling down, not as graceful as we did in our youth, picking ourselves up and trying to maintain that attitude of gratitude even when it’s hard to find it in things such as this. It wasn’t long until the conversation started to lull between us, both in our own thoughts gazing at the fire...until she was starting to dozing off. And to be honest, so was I. A full stomach, a warm fire and a comfortable chair was all I needed. There is such sweet comfort in having a friendship that needs no spoken words, but still can speak volumes through the silence. I left my friend to take a rest until her home care aid came to assist her, I got in the car with some music and the memories of once again a sacred friendship that has lasted for half a century. Heal up my friend and be safe. Kayaking this summer awaits us.