Waiting In a Minnesota Line 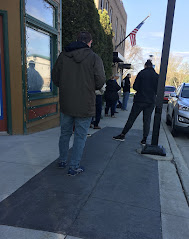 Recently I had to renew our tabs for the big conversion van and the camping trailer we pull behind the van when we travel. With Covid rules still in place at the Department of Motor Vehicles (or the DMV as it is affectionately known), I decided I would give the online renewal a try. I was remembering back to a few months ago in January when we needed tabs for the vehicles and the experience I had.

It was just a few degrees above zero and the winds were howling making it feel like about -25 below zero. Because only 5 customers were allowed at a time in the DMV office, the rest had to wait outside out on the sidewalk.

It was a typical Minnesota wait in a line of about 25 people. Everyone maintained their 6 foot of distance. Maintaining a 6 foot distance has never been an issue for many Minnesotans. In fact when the 6 foot rule came out, many were asking if that was far enough away as that is about the normal distance a fellow Minnesotan will maintain with another native Minnesotan.

Most of us in line were dressed in layers, like they were going to go to a pond hockey tournament after they took care of their DMV business. They were in layers, scarves, choppers, holding their cup of coffee from the Kwik Trip with both hands. There were young newlyweds waiting to get their name changes and address changes on their licenses. There were a couple of older guys in bib overalls and red plaid earflap hats waiting together to transfer a title for a truck. There were active military people there getting things in order before they deployed overseas. And there were the rest of us, garden variety people, who needed current tabs for our vehicles.

How did I know all this? Well after everyone joined in chatting about the cold snap coming and the current Minnesota weather for 30 minutes, it just got more personal and everyone shared their reasons for being out there on the sidewalk waiting. By the time it was my turn to go into the building, that only allowed 5 people at a time, not only did I know the week’s weather, but I had learned much about each person out on the sidewalk waiting in line. I knew what church they went to, or why they didn’t attend church. I knew what restaurant they planned to go to the minute the Covid restrictions were lifted, I knew the names and ages of their kids. And I even learned what had been the hardest adjustments the newlyweds had been facing.

I can honestly say that waiting in a long line in frigid temperatures let everyone’s guard down in regards to sharing their lives with strangers. Some even were talking politics and what their political stands were. Kind of unheard of topics for strangers to discuss here in the land of the Stoic Swedes. It was just plain crazy all that was shared so freely. It had to be the cold numbing of the brain that caused everyone to let down their Scandinavian guard.

Well fast forward to Spring and once again I had to go to the DMV to renew tabs that can’t be done online. The thought alone of having to go stand in line was putting me into a pretty crabby mood even before I got out of bed. As I was lying there, I decided to make my mind up that I was going to get up and prepare to stand in line for 2 hours or more. I would get there at 8:30 before they even opened at 9 and be the first one in line to get my tabs. I was going to just “git ‘er done”. I had more important stuff to do than spend an entire morning in line.

I decided to do the Cub Scout thing and be prepared for anything. So I got up, premedicated with Tylenol for the arthritis in my back and leg, dressed in warm clothes. I had done my duty and listened to the morning weather report. It was calling for a cool morning and warming up later in the day. So dress for winter and be able to peel off layers in case I was still there after the sun started warming up the sidewalks and town. Even though we are into the month of May, it has snowed in June here over the years. My clothes consisted of layers of t-shirt, hooded sweatshirt, jeans, shoes and socks. I had a snack packed with 2 girl scout cookies and my hot chocolate in a mug to sip on the ride down to the DMV. As the crow flies the DMV is about 6 miles directly South of us. But as the road goes, it is more like a 23 mile drive through windy roads along many lakes.

So off I went, to the DMV office. I pulled up at 8:20 AM only to find a line had already formed. Yep, 40 minutes before they were to open and there were 10 people in front of me that had the same idea. So much for being first to get in and out right away.

I took my place in line, said good morning to those in line with me and staying the Minnesota 8 feet away. I dug out my phone to look at stuff and try to avoid conversation. I just really wanted to stay warm, stand in line silently and wait my turn. Luckily the line started out with mostly guys around me, probably feeling the same way. They had their phones out too, but didn’t look all that involved in what they were doing. Pretty soon more people started coming. By 8:55 the line strung all the way down the block. I looked and sure enough the chatter was beginning. First the weather was discussed for several minutes. Then several talked about how a few months ago they stood out on the sidewallk freezing.

And then it happened... a guy who had weathered the cold winter line like I had a few months ago, lifted his jeans leg up to show his flannel long john’s he was wearing. Everyone laughed uncomfortably as he did. I think they were thinking like me, “we hardly know you. Keep your pants leg down, please”.

To my surprise, the conversation ended as fast as it was building up when that man showed God and all of us in line his “long john underwear”. He had crossed the  line of personal sharing with the display of his blue checked long johns. It wasn’t so cold as to have frozen our brain cells, we were all in our Minnesota right minds. And the stoic Swedes that we all are knew better than to advance the topic. It was getting way too personal. At that moment everyone started reaching for their phones and browsing them again. Within an hour of arriving, It was my turn to enter the DMV and take care of my business. I went in, sat in a chair waiting with 3 others. We gave each other a quick glance and then stared straight ahead uncomfortably waiting our turn. There are just certain things in Minnesota a person doesn't discuss with a stranger, and underwear is one of them. The aftermath can last for months.