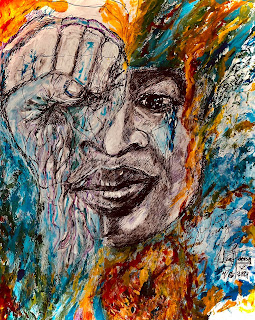 With all that is going on in Minnesota these days, it’s had me sort of pondering the phrase “Minnesota Nice”. There’s been protests, rioting,and we've pretty much made the nightly national news over the past several weeks. I’m not sure that is something that is worth wanting to brag about. But it is what it is.  We’ve had nightly curfews down in the Cities due to civil unrest regarding the George Floyd trial and now another officer involved shooting just a few weeks ago of a 20 year old man. It has really put Minnesota on the world map. And honestly it really sucks to be this popular over such awful events.

And while all of the unrest is real and emotions and feelings are running hot, the other day I just needed to take a break from all of that, if even just for a little bit. So I headed out to find some “Minnesota Nice” uptown. While Minnesota Nice is not a really kind thing to say about a fellow Minnesotan, it sometimes can just be the break needed during stressful times. Minnesota Nice can turn comical at times. And for me, that is just what I needed.

Wikipedia actually has a pretty accurate description of Minnesota Nice.It describes Minnesota Nice “as a cultural stereotype applied to the behavior of people from Minnesota implying residents are unusually courteous, reserved, mild-mannered and passive-aggressive. The phrase also implies polite friendliness, an aversion to open confrontation, a tendency toward understatement, a disinclination to make a direct fuss or stand out, apparent emotional restraint, and self-deprecation.” That definition pretty much nails it.

So now that you have an understanding of the definition of Minnesota Nice, let me describe it to you as I ventured up town for gas and some groceries. All was fine until I neared the edge of town where the new roundabout was put in a few months ago. I personally am not a fan of roundabouts just because they can get a little confusing with high traffic. It goes along with freeway ramp merging that some people struggle with. This roundabout will maybe see 20 cars every 5 minutes if that. The day I was going through there was a traffic jam with about 4 cars in the roundabout. As I approached and was going to stop for the car coming towards me in the roundabout, the driver in that car also stopped to let me in. And there were 3 other cars stopping behind her. We were all stopped, no one was upset, no horns honking at the driver to get moving. I waved the driver on and she waved me on...I waved her on again and she waved me on again. We were at a Minnesota impasse. As I started to just go so we could break up the traffic mess before more cars came, the driver started to move forward also at the same time.

So again I stopped to let them all through and to complete their circle in the roundabout. It really was the right thing to do...if only the driver would let me wait. Finally a semi driver was coming up behind me and showing no indication of slowing down or stopping so I just jumped into the circle and led the parade out of the roundabout up to the 4 way stop. Yep you guessed it...there were 2 other cars at the 4 way stop. And so we started the process all over again of who should go first through the intersection. We all started waving everyone else on until the semi truck got there and honked his horn and threw his arms up in the air. We all inched out at the same time and we all stopped. I finally had the guts to make my left turn before anyone moved again. I felt so exposed, so vulnerable...everyone was looking at me and probably thinking “Wow she has some nerve. Must not be from around here”.

By the time I got to the gas station I was a might frazzled from all of the Minnesota Nice that had just happened. I pulled up to the pump and waited for the clerk at the checkout to tell me to come inside to pay when I was done. When she turned the pump on, she greeted me with a hearty good morning over the PA for God and anyone within a ½ mile to hear. And if that wasn’t enough, she went on to describe the incredible blueberry muffins they had inside and I should make sure to pick up a box.

I finished filling up my minivan and went inside. As I entered the store, I was greeted by several clerks that were stocking shelves. Each one reminded me of the great blueberry muffins that were just over on the counter by the checkout. I wasn't needing muffins, I had had breakfast and didn’t want to clutter the counter with a box of muffins we may not eat before they got moldy.

When I got to the check out with my 2 boxes of blueberry muffins, the clerk greeted me Minnesota style by discussing the weather for the day. The clerk and I discussed the pros and cons of all the rain we have had. It is better than snow this time of year and we do need the moisture since there is a fire ban on. If ever at a loss for a conversation with a native Minnesotan just bring up the weather. It  will get you miles of conversation. Well, I gathered up my muffins and headed out, but not before hearing her say “Have a great day, see you next time”.

I got in my minivan, carefully set the stack of muffins on the seat and proceeded to go home. I played it smart on the way home. I took the back roads so I didn’t have to deal with the roundabout again. I don’t think I could take any more decisions about who goes first in a roundabout.

I got home and unloaded my boxes of muffins and turned on the news. And there we were again...Minnesota making national headlines. The verdict was in regarding George Floyd. Former police officer Derrick Chauvin was found guilty of all 3 offenses. He was led away to jail in handcuffs. As I was watching that, the news panned across the streets near where George took his last breath. And there I saw it…no protesting, no rioting...just a bunch of people hugging and crying after hearing the verdict almost a year after the incident happened.

Yes we are kind, courteous, reserved, mild-mannered and we can be kind of passive-aggressive at times. We can be polite, friendly, have an aversion to open confrontation, or a tendency toward understatement, and maybe have a disinclination to make a direct fuss or stand out.

But today I watched as my fellow Minnesotans showed their true colors from their hearts in hopes of making this a better place for all of us to live.