Camping in the "Damn Camper" 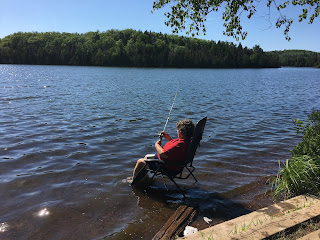 We were pretty excited that after a long year of being homebound, due to Covid, we can finally head out and do some traveling. Our first venture out post Covid, we decided, was going to be to take the camping trailer to a State Forest up near the Canadian border. There is a beautiful place right on a lake that we had been to several years ago. Warm days and cool Northern nights, no better weather to be in after the incredible heat of the past 3 weeks.

Way back in April my Best Half put in for vacation time and the preparations began once the snow was off the ground in May. We have a smaller camping trailer we bought used 3 years ago for a much anticipated trip to the Big Bend National Park in Texas. We knew there were a few things needing to be worked on in the trailer and we set out to fix them one by one. Fortunately the air conditioning was not one of them as the heat was in the triple digits most of our time down in Texas. We could at least have some cool relief while sleeping at night. You really don’t want to mess with a Minnesotan that has not slept because of temps being over about 75 degrees at night. We can get pretty sleep deprived and all out ornery. It is best to just stand back or walk away for your own well-being.

While we were there, at Big Bend, we discovered more “fixes” were needed just to make the trailer liveable and not just a metal box where we were sleeping. There were water lines to the shower not working, the hot water heater leaked, the siding had fallen away from the front of the trailer on the way down (Gorilla tape is an awesome temporary fix for many things and it worked for the siding). And on the way home in Arkansas we had a tire blow out. That wouldn’t have been too bad, but at the time “Mr. Fix-it” had a cast on his right hand and was totally unable to get the lug nuts loosened. We were on an entrance ramp somewhere 10 miles from the nearest town when along came Arkansas Jim. He was an elderly man who took pity on us. Seeing the casted hand he took the socket and cranked on the lug nuts and got them off, only to realize the tire we thought was the spare didn’t match up with the trailer. While I stayed back at the trailer, with the 2 dogs, the two of them went up the road 10 miles to Walmart to get a new tire. In the hour or so they were gone there must have been 15-20 people stopping to see if I needed help. Arkansas, you have my vote for friendliest state in the US. Thanks to Mr. Jim and his kindness and efforts we were back on the road and eventually home with no more trouble from the “damn camper” as it had been nicknamed.

By the time we were home, we had a good sized list of “fixes” the camper needed to be safe and road ready. The entire kitchen side had no electrical power working, more hose lines for the water needed looking at, the hot water heater needed replacing and worst of all, the fridge did not work on any power source, electric, battery or propane. All were fixed except the fridge as the cost to replace was really expensive and it was decided to just use it as a cooler and put buckets frozen with ice in it. So over the past year,while stuck at home due to Covid, we got all the fixes done. I should say My Best Half got all the fixes done, I just watched from a distance to stay out of the way.

So the other day we were all packed up and ready to go on our maiden camping trip of this year with the fixed camper. We set out about 6AM hoping to get to our destination about noon, with a few stops along the way. The drive was beautiful and there was a cool breeze off the shores of Lake Superior. There were tons of fishing boats out there and I reminded myself of my longing to someday go salmon fishing out there with a hired guide. It was beautiful and slowly all the hassles of the “damn camper” seemed to melt away. And we both sat back into the van and got lost in conversation about what we will do and where we will go come December when my Best Half retires after 38 years at the medical facility where he works. As we got further North the scent of the pines filled the air. It was like Christmas time when you bring the Christmas tree in the house and the deep natural pine smell permeates the air. Just like that only magnified 1000 times. I don’t think there is a better scent than that.

As we pulled into the campground and started driving the circle of campsites, we realized that over the past few years they had started taking reservations. All the sites were reserved, each one that we came to. Just as we were discussing Plan B (which we didn’t have), we found the last site and it was open for the days we would be there. And it turned out to be the same site we had stayed at years before. I was thinking, it must be Karma, a sign it was going to be a great few days. The site was huge, tucked in beneath the towering pines with the shore of the lake right by the fire ring. There was a path right into the water and the beach area was sloping out with no drop offs, just a pebbled beach to wade into. Absolute perfection.

We grabbed the site before anyone else came along and started the process of backing the camper into the site. After many hand signals and me waving my arms on which way to go, and my Best Half just throwing his hands in the air as I tried to guide him into the site, we made it. Backing a camper as a couple is not for those in a weak or vulnerable relationship. Many a marriage has come close to reaching the breaking point with trailer backing. Over the years, I have seen many a marriage teetering on domestic fighting throughout campgrounds in the US. And I am not ashamed to admit it that in our early years it could have been us.  But now we have a system that consists of my Better Half stating, “Remember if you can’t see me, I can’t see you”, and me flailing my arms with directions knowing they won’t be taken into consideration at all. We have perfected our method and it works.

So with the camper in place, the chairs set out by the fire pit and the dogs having a well deserved swim, we went to the camper. I made lunch and then we decided after getting up early a nap was in order. Afterall we were on vacation. For an hour or so the only noise you could hear was the Lab snoring. I couldn’t take any more of the doing nothing so went down to the lake and cast my line, again and again only to catch a perch about the size of a goldfish. I love to fish, but at some point, I love to actually catch fish. I had enough casting time so went on to get some firewood for the campfire and suppertime.

In the State Forest you need to gather your own firewood, unlike the State Parks where they sell it by the bundles. We went across the road and looked at the downed firewood...and all the green that surrounded the downed firewood. The forest floor was covered with leaves of 3...poison ivy. Yeah, it was covering the entire area. We looked at each other and agreed I should try out the stove in the camper. So the steaks I had brought to flame broil over the fire got put in a pan and fried. With no seasoning as I forgot to pack that. And forks, I forgot to pack forks. The only thing in the camper were “sporks”, you know those things that look like a spoon with jagged edges on the ends? KFC sporks. Our supper consisted of soupy watery rice and not too tender steaks eaten with sporks.

I started to clean up and turned on the water in the kitchen sink. As I was washing the plates my feet began to feel wet and then soaked. A water line had burst open under the sink and water was gushing through the cabinets and under the sink. It was soaking wet on the carpeted area. Two bath towels couldn’t contain all the water. Yep the “damn camper” had done it again...another fix needed.

We sat there in silence with our soaked rug and feet and then the question was asked, “A penny for your thoughts?”. Trying to gather my thoughts, I finally blurted out, “I’m not really into camping much anymore. We live in the country, surrounded by nature, not much noise to speak of and no business around us. We have space with no one around us except deer, bears, coyotes and eagles to look at when sitting out on the deck. If I want a campfire, it is right by the house with a load of wood stacked ready and waiting to be burned. I can see the stars and the milky way on a clear night. I can canoe or kayak a few miles down the road and go fishing and catch all the fish I want. I like to travel and see new places and then move on. I’m just not sure I am wanting to sit here for the next 3 days when I could be home doing the same thing with running water and a dry floor.

Leave it to my Better Half, he looked at me and said he kind of felt the same way. He loved hanging out at home on his days off and doing stuff around home. In a matter of minutes, we packed up the campsite, loaded up the dogs and at 7 pm headed home. We got home, showered and were in bed sleeping by midnight.

I guess the last year of hunkering down at home because of Covid we learned to be ok and content in our daily surroundings. We have more here than we could ever wish for out on the road. We still want to travel and explore when retirement comes in December, but for now there is a contentment knowing that everything we want or need is right here. For the next few days, we are on vacation and will enjoy every minute of every day here at our home.