Our 6 MIles to the Gallon Home on Wheels 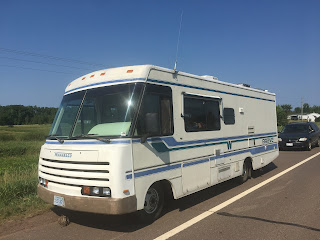 Well it has been a few weeks since getting the used Class A RV. We drove it home 140 miles and parked it for a few days while I shampooed the carpet, with the intent to replace it with laminate flooring next year.

The other night we headed up to see our daughter and the little ones while the rest of her family was playing softball for their church league. As we were getting ready to head to their house, I suggested we take the RV. We were going to drop off the minivan for them to use for a few days while their big van was being fixed. So off My Best Half went in the RV and I left in the minivan to first pick up some tacos to bring up to the little guys.

We arrived about the same time and proceeded to show our daughter and her 3 little boys the RV. They were all amazed at the size and layout of it. The little guys took turns in the driver’s seat pretending to drive it, while my daughter and I were sitting on the couch talking about the anticipated trips we would be taking. Meanwhile the owner of the rare beauty was walking around the exterior looking at it and finding more things it had, like an outside shower and more storage.

We ate tacos and visited for a bit and then decided to head home. I left the van keys with our daughter as I hopped in the passenger seat of the RV and gazed out the massive window. I was excited to drive home and get a feel for the RV. Afterall, I only got to ride in it during our “test drive” before we bought it.

We drove down the mile of bumpy driveway from their place and got on to the gravel road which led us finally to the paved county road. I was just starting to settle in for the half hour drive home when the RV started sputtering and chugging and losing power. We limped to the side of the road just as it chugged one last time. Oh great, already a problem. We just looked at each other, and could read each other's mind…”well here we go, so much for any fun plans with this beast”. It was really hot and humid out and we just sat there a few minutes in silence, an anguished silence.

Trying to restart it was a futile attempt to admit the obvious. Realizing, too late, the gas gauge was not accurate we were out of gas. So I called our daughter and asked if she could bring a gas can and meet us up on the road. She had just gotten the 3 little guys in the tub so it would be a few minutes. That was fine, it gave us more time to dwell on the RV being on the side of the road broken down.

She came charging up in the minivan with the 3 little guys in tow all excited to rescue their grandpa and grandma from any sort of danger that may happen on the side of the road. They all climbed in the dead RV while my Better Half went the 3 miles to the gas station to fill the 4 gallon gas can.

He made it back and put the gas in, but of course it wasn’t enough for a 60 gallon tank, so went back for another round of gas to put in the RV. Fingers crossed we got in and went to start it. Nope it wasn’t going to start. By now we were thinking the fuel pump was shot. Our daughter, having gone through a bad fuel pump on their truck, told us that banging on it while someone started it would get it going. At least according to her mechanic when they broke down. So she went under the RV with the only thing we had to tap it with...the fire extinguisher. Sure enough the RV sputtered and then started. She rolled away from underneath and hopped in, meanwhile I was in the van with the boys. The RV roared briefly and went about 100 feet before it died again. This time there was no pounding that was going to revive it. From trying to start it the battery was now dead.

It was time to call AAA and get it towed into our mechanic to get a new fuel pump. Out of the wallet came the AAA card and they were called. There was no talking to a real live human, everything with AAA is now automated. So after many directions to push this number for that and press the # button for this, we finally got the call finished with a text back they were on their way. So I drove our daughter and kids back and came back to the RV to wait for the tow truck. It was about 8:00 pm. And so we waited, and waited and a text came that the truck would be there around 10:30. I decided I would take the van home and meet up down the road from our house once it was being towed. I could pick up my Best Half at the shop. Off I went 35 miles home.

More time passed and AAA still showed on the computer that the tow was coming at 10:30. It was now 11:30 and no it wasn’t there yet. I got a text from my not so patient anymore partner. He had finally got in touch with a real person at AAA and was told there would be no tow truck coming, he was “on his own” to find his way out of the mess we were in. It was now after midnight and over 4 hours waiting for a tow that would never show up. To say we were angry is an understatement. We have had AAA for over 30 years and have never been let down. Some choice thoughts were rambling through my brain as I went back up the 35 miles North to pick up my stranded counterpart.

When I got about ½ mile from the RV, I saw the flashing lights and high beamed search light on the Pine County Sheriff’s car parked behind the RV. Could this night get any worse? I was sure we were now going to get told we had to get the RV moved ASAP or we would get fined. I pulled up behind the sheriff’s car and then couldn’t figure out if I should stay in my Jeep or walk out there and stand with the two of them. Doing so would mean approaching the deputy from his back side. I was afraid he would think I was ambushing him. Yes me, all 5’ 4” of me. There has just been so much in the news lately around here about people approaching law enforcement and getting taken down.

I watched the body language of the 2 guys and it looked pretty relaxed and engaging so I started yelling “Hi I came to pick you up” all the while with my hands up and out beside me. We have had enough trouble in Minnesota the past couple years, that even me, a 60+ year old short white woman could be seen as a threat out of the corner of the deputy’s eye.

I got within 6 feet of them and the deputy was chatting with my Best Half and telling him it would be ok, he wasn’t in trouble, and things happen. He was on patrol overnight and would drive by the RV over the night to make sure it was ok. He gave us his disatcher’s number and his name and told us to call when it got towed so he knew it was us doing the moving of the RV. All we could do was say thank you to this guy for looking out for us and putting us at ease to be able to go home and deal with it in the morning.

We got home, slept fast and got up early in the morning to go back up to the RV on the side of the road. All was ok, so Deputy Sell must have stuck by his word to us to watch it and make sure the other deputies coming on duty didn’t ticket us. We would be giving a shout out to Pine County Deputy Sell when we got back home. And we would be giving a not so good shout at AAA for leaving us stranded.

We discovered that finding a tow for a Class A RV is not easy. It requires heavy duty trucks, even though it is a pretty small RV in the greater scheme of the RV’s out there on the roads. Ours could fit inside most of the ones we pass by. We finally called a place that said they could tow us and they were AAA approved. The only catch was that AAA had to approve it first. We thought no problem, we will call AAA and have them call and get it approved. We will be on our way in no time. While we were on the phone with AAA, they called the towing place. A few minutes later the person from AAA was denying the tow. The only thing we could figure is the cost was out of what AAA wanted to pay, even though we have their RV gold plan that tows everything. Well now we were, let’s just say, ticked off even more with AAA. I was fuming.

We finally found a place to tow us and we would have to pay out of our own pocket…$600! With no alternative we waited for the tow truck and off it went to the mechanic. Once there, our diagnosis was confirmed. It needed a new fuel pump, costing $1000. With no alternative we got the repair done and picked it up. The trip home would mean a stop at the gas station so off my Best Half went to Fleet Farm to get gas, and I went to Menard’s for some supplies. I walked out of Menard’s and got a text from Fleet Farm across the street…”the drift shaft is lying on the ground underneath the RV”. The towing company had disconnected it. We were 3 miles from the repair shop and they came over and crawled underneath and put it back together. Really? We don’t even have 100 miles on it, I thought.

With everything fixed and $100 worth of gas in the tank we decided the next morning to go for a drive and make sure it handled well. It did...at 6 mpg, our house on wheels runs just fine. After a lively discussion about how cool the RV is and how we will go broke just driving it around the state...we may be selling it. We will decide when cooler heads prevail...mostly mine.