Until We Meet Again, Old Girl... 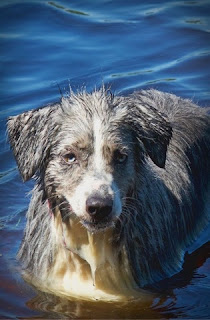 We have 3 dogs that live with us. All have very distinct personalities and habits. Some people refer to their pets as Fur-Kids. We more or less call them dogs. But deep down each one has captured our hearts in their own unique special way over the years.

I like to work with dogs and train them to have jobs around the house. A way for them to feel needed and a way for us to think they are “earning their keep”. Each dog has a job around us and they have been pretty reliable in fulfilling their duties.

For Zoe, our 5 year old yellow Lab, it is to help pick up the house every day. Being a Retriever, it has been easy to have her “fetch” stuff off the floor. Each morning she will gather up the dog dishes after the 3 of them eat. She will bring them to me to put up until next time. Or she will bring me laundry on the floor. If we are being really helpful, I will have her put it in the washer. She also will take clothes from the dryer.  She was even taught to open the fridge and fetch a bottle of water. But I have since put the kibosh on that when she started bringing me salami to share with her.

Max is our 3 year old Lab/Poodle cross, a Labradoodle. An expensive name for for a mixed breed mutt in the designer dog world. But Max lives up to his mutt upbringing. He likes to roll in manure when available, drinks from the toilet and will eat anything that isn’t a green pepper. Max is my partner. He has been taught how to brace when I am trying to get my arthritic back and leg up off the couch or chair. He will come and plant himself sideways in front of me and I will hold his back as he walks to boost me up to standing. He has done a great job helping me. He is 80 lbs of muscle and agility and just knows what is expected of him.

And then is our 11 year old Australian Shepherd, Rainey. She has a work ethic that any employer would be excited to have working for them. I trained her, with the help of some professional trainers giving me tips, to be a hearing dog for my Best Half. She was trained to alert him to people calling his name by slapping his left thigh with her paw. This would alert him to say “show me” which would put her in a trot back to whomever was calling for him. She would go and sit by that person. This has always come in handy when I am at the opposite end of the house needing assistance. I could use a bullhorn and yell through it and would never get a response. But just a paw slapping his leg would cause my Best Half to come see what was up.

One time when Rainey was being a little too rambunctious in the house, I decided to have her work off some of her energy and put her through her paces. I told her to go get David which was the cue to go slap his thigh. The moment I said it she bolted for the family room, hopped 5 feet over a loveseat that was dividing the room. Remembering she wasn’t allowed on the furniture in mid-air she twirled and turned her body so she landed on the floor next to his left leg. The look of horror on my his face as she was flying through the air towards him, as he was taking a sip of coffee  was priceless. She gave him a hearty swat with her paw. He asked her to “show me” and off she ran hopping once again over the loveseat and into the room where I was. She did a sliding sit in front of me and waited until he got to me. Like I said there are many employers who give a fortune to have such enthusiasm in an employee.

Over the past 10 years, Rainey has been by my Best Half’s side out in public when I wasn’t with him. She would alert him to cars coming up behind him in parking lots. She has saved that guy's bacon many times over. I am the first to admit that Rainey was way more patient with his deafness than I have ever  been. The two of them have a bond that can only be seen as best friends.

For the past year or so, Rainey has slowed downed and “semi-retired” from role as hearing dog. She is happy to sleep 23 out the 24 hours a day as she has aged. We learned a while ago that Rainey had a tumor that has been growing fast and now is about the size of a basketball. It is consuming about half of her body.While it hasn’t bothered her much before, lately it is starting to effect her breathing and ability to be comfortable. The tumor is also pressing on nerves on her leg so she is starting to struggle when walking.

The other day, Rainey’s human came home from work and sat down at the kitchen table. As usual Rainey came over for her usual scruff and then went to lay down near his feet. After a few seconds of silence he said he thought it was time to put Rainey down before she is suffering too much. He didn’t want her last days to be gasping for air or in severe pain. So he called the vet and scheduled a time she would come out in a few days and put our little Rainey down. What could I say? He was right in the decision, but still it sucked having to make that decision.

Wednesday morning came and the Vet called to say she was on her way and would be there in 15 minutes. We both went outside with Rainey and sat on the steps with her between us. Although we both had said our good-byes in our own way, the tears started coming down my cheeks as I went over the truck to talk to the Vet. Rainey and her best friend just sat on the step with Rainey on his lap. We were losing our beloved Rainey in a matter of minutes. My tears now were flowing freely.

The Vet and her assistant came up to the step and Rainey was tucked between us and trembling and growling which was something she never did. She knew. Tears were coming at an outpouring by this time. At least from me. I looked over at my Best Half holding Rainey and saw his jaw set tight, but there was so much sadness in his eyes.

After several minutes of the Vet quietly talking to Rainey as they both sat on the concrete sidewalk, she finally walked over to the Vet and let her pet her. She continued to talk softly and gently and told us what she would be doing, all the while stroking Rainey gently. She explained that she would give Rainey a sedative injected into her hip to completely sedate her. Then she give a final injection that would end Rainey’s life. We both were pretty speechless and just nodded our heads to go ahead and do it.

Within a few minutes of the first injection, Rainey layed her head down and was peacefuly unconscious. The Vet then administered the second injection and after a few more minutes our sweet girl took her final breath as we sat next to her and held her. We all sat there a few more minutes and then it was time to bring her to her resting place. A grave under the pines where she always would go had been dug the night before. It was morning and the sun shined down on the sight. The Vet and her assistant offered to help carry Rainey to her grave and we let them as both of us were needing that support at the moment. They helped us lay her gently in the ground and were willing to help bury her, but we knew we had to do that oursleves if nothing else to put closure on everything.

After hugs and condolences the Vet got in her truck and they drove off down the driveway. For a few minutes we just stood in silence and our own thoughts. We then covered Rainey’s grave and went inside. Once inside, Rainey’s Best Friend, sat down and finally let out his grief and sadness and cried. He had 10 years of Rainey close by his side alerting him to cars coming up behind him, leaping and bounding over furniture when I called for him at the other end of the house, and evenings lately where she spent lying next to his feet or with her head on his lap. Rainey had taken her job as hearing dog seriously up until her last breath. She did her job faithfully and was a loyal best friend to us all, but especially for the one who needed her ears and wet nose to help him through a loud world. Until we meet again, girl……..