Grandpa and the Engström Rooster Gene 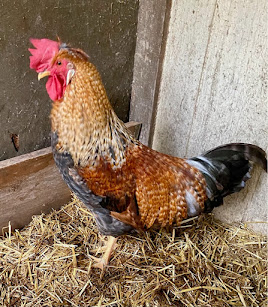 In my extended family we have a FaceBook group called the Engström Rooster Gene. It was created several years ago by family members who have inherited the ability to consistently wake up at the crack of dawn without any alarm and be ready to greet the day ahead. Right now there are about 31 members there consisting of a sibling, nieces and nephews, my kids, my cousins and their kids. And a few of the spouses of true early awakeners. Each of us have claimed to have inherited that Rooster Gene from my Grandpa.

Grandpa was a pretty quiet guy, at least from what I remember. He loved to tell you a joke or bounce the little kids on his knee singing Turkey in the Straw, or try to scare you by popping his dentures out at you. He never scared anyone, in fact that became the favorite request of the young ones, to ask him to pop out his dentures. When sitting at the table with the adults, he’d quietly sit there while my dad and uncles would talk politics or religion, and sip on his coffee and eat some sweet treat like a cookie, or donut, or a piece of apple pie with ice cream. He did love his sweets.

Many of my family members, mostly cousins and my brother, had the great fortune to live with my grandparents over the years. Sometimes it was while building a house, or finishing college, and sometimes it was because someone just needed a place for a short time. Grandma and Grandpa never refused  opening their home to someone who was in need. Even at Thanksgiving, there would be many friends of family members who had nowhere to go. Grandma and Grandpa always made sure there was a place for all at their table.

Even in times when they had little, they always had enough to share with others who maybe had less. I remember them telling me the story of when they lived up North on the farm during the depression years. They lived not far from the railroad tracks and many homeless weary drifters, looking for work, would hike up the path to their house looking for work or food. My Grandparents never refused a person in need. They never left a person walking back down that trail to the tracks hungry. While they couldn’t hire them for a job, they did always give them something to eat. They would share what they had, they always had something. They told us that back then when so many were riding the rails and looking for work, the drifters would tie a red bandana near a trail up to a house. This was a sign that the house ahead was safe and those there would share food if they could, even if it was just a piece of bread with some jam on it. I remember once when I was older and talking to my Grandma,asking if she ever wanted to tear down the red bandana? Grandma said,”Never. As long as we had food to share and others didn’t, we shared”.

It wasn’t long after that I remember my Dad and Grandpa talking one day. By this time Grandpa had some dementia and forgetfulness of current things. But he could remember anything years back. My Dad was talking to him about it being the time of year they had jumped on the train heading West to look for work. Him and Grandpa reminisced about hopping the trains out to South Dakota, where my Grandpa had been born in a tiny town called Kennebec. It was the county seat for Lyman county thanks to his uncles and his Dad going into another town in the dead of the night. They removed all the vital records and such from the courthouse there and brought them back to Kennebec. Kennebec officially became the county seat at that time.

Grandpa was always an early riser. I guess from living on the farm and then working the early shift once they lived in the Cities, he just developed an internal alarm clock. His internal alarm clock was set for 5 AM even long after he retired. He would be up and ready to greet the day by 5 AM. Grandma, on the other hand, she was the night owl. She would be up late watching Johnny Carson until midnight, or reading a book. She always read the end of the book first to see if it was worth taking the time to start the book. I guess she figured life was short, no use wasting your time on a book you aren’t going to like.

For all those that had the chance of living with Grandma and Grandpa, there was an added bonus. They had an official live human alarm clock. You just would tell Grandpa what time you needed to be up and he would be by your bedside waking you at that time. The amazing thing was, he never, himself, used an alarm. Even if it was before 5AM, Grandpa’s internal alarm would go off in time to get you going.

If that wasn’t the best thing ever, he’d have fresh brewed coffee from the glass percolator on the stove and a bowl and a spoon set out with different types of cereal on the table. Even as the years passed and the dementia worsened, his internal alarm never failed him. You could always count on stopping by early in the morning and Grandpa would be at the door to greet you with the smell of fresh brewed coffee.

I’m not sure when it started, but years ago one of the family posted on FaceBook how no matter how hard they tried to sleep in, they would always be up at 5 AM, even on weekends. Comment after comment started rolling in from family about how it is the same thing for them. No matter how late they go to bed they are up by 5 AM. And then a niece sent an article describing how whether you are a night owl or early riser it is genetic and can be inherited, it’s not just by environment. The study talked about 100’s of genes that play a role in whether or not you are a night owl or an early riser. And it was shortly after that the Engström Rooster Gene group was established.

All of us affected by this genetic phenomenon are members. And so are a few of the spouses of the family members as they have been just as affected. Many upon marriage no longer have the luxury of sleeping past 7 AM. Anything after that is considered sleeping in and missing much of the day. There are afterall, things to do, places to go and people to see. I can speak to this personally regarding my Best Half. While he is still sleeping and I have been up for 2 hours, I will start getting antsy to get the day going. So I will go into the bedroom and silently stare at him until he “feels my presence”. He will be sleeping in bed and without opening his eyes will mumble something unintelligible and say  “I guess we’re up”. I’m thinking with his retirement a few weeks away, I may need to give him a little extra time for a few days. Maybe 7:30 will be his new wake up time.

We have inherited so many things from our family of origin. Things like our ethnicity, our holiday traditions, even our desire to help those in need. But to be honest, the Engström Rooster gene is probably my favorite. It adds hours to my day and over the years I have seen so many beautiful sunrises that I would have otherwise missed. It has been awesome to watch and see which of the grandkids have this inheritance. So far it seems to be 50-50, but teenagers I think for a few years are ok to be exempt. They are on a totally different alarm clock that most of us don’t understand.