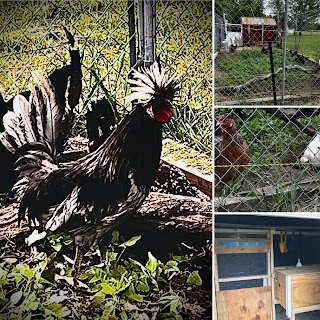 About 2 years ago one of the Grand-daughters and I turned an old metal falling down shed into a chicken coop. While neither one of us knew much about construction, we did figure out what we wanted the coop to have in terms of housing a dozen chickens or so.

We set out one early morning and found a bunch of used lumber in the barn and bought some hard mesh wire at Fleet Farm and set out to make the “ultimate” coop. Remembering the old saying of ‘measure twice, cut once” we got some old 2x4’s cut to make a wall and a door for the front of the coop. We partitioned off the back 4x8 feet of the metal shed and then proceeded to put the mesh on it.

After patching up our cuts on our legs and hands from the sharp wire mesh, it was time to make the nesting boxes. While I like to watch the chickens and gather the eggs daily, I do not like walking into the coop to get the eggs. So with the help of the Grand-daughter, we made a big wooden 3 sided box, with the top being hinged and able to open it into the nesting area from outside the coop that wasn’t partitioned off. Then we separated the box into 3 areas so the girls could choose where they wanted to lay their eggs.

We finished the 2 day project and painted the nesting area and put down vinyl flooring in the coop for easy cleaning up the floor mess of shavings and chicken manure. We then put a chicken wire fence 6 foot high around the coop for a run. We don’t free range the chickens due to dogs and coyotes and weasels and other chicken grabbing critters out in the yard.

About a week after putting the 3 month old chicks in the coop they were let loose to forage in the fenced in area. And then one night it happened…something got into the pen and grabbed 2 of the hens we had. I came out that morning to feathers all over the yard and the chickens left in the coop all huddled in a corner. Something had gotten to the run.

Beyond being upset that we could have gotten the whole flocked wiped out, I was determined to fortify the area so nothing could get in there again. I found an old chain link 6 foot high dog fence on Marketplace and with the help of the Grand-daughter once again, we got the start of Fort Chix set up. I then found an old electric fencer from when we had goats and horses. I strung up 4 strands of electric fence around the run from 4 inches high to 6 feet at the top. After accidentally bumping into it, I knew it worked just fine. And then came the outdoor lights on a timer that would go on at dusk until dawn each evening. The coop was set, with the exception of security guards posted on the corners of each side, it was fortified for anything that may try to hop the fence. I had to hope nothing would fly and swoop in the small area.

That night I had the window open and was awake most of the night on and off listening for any ruckus down at the coop. I was dozing off when I awoke to a yelp and a yip. Just once. I went down to the coop to make sure everything was ok and found the chickens all tucked in safely in their coop on their swinging perches. I didn't see what caused the yelping but figured a coyote as I had heard the pups in the field earlier yipping. The wire worked and since then we have never had an invasion since.

Last winter, before we left for Texas for a few weeks, I decide to rehome the chickens we had so that we didn’t have to have our neighbors out in -30 below weather caring for them. It was a good decision at the time, but eventually we got Spring here in Minnesota and I was missing having the chickens. I was especially missing a crowing rooster in the morning.

So I cleaned out the coop and plugged in the electric fence and off I went to a nearby farm that had a few chickens and a rooster. I was able to pick out 4 hens and a silly looking crested rooster with feathers missing off his supposed to be fluffy head. He wasn’t the only rooster at the farm and he obviously was last in line for the lutefisk as we say here in Minnesota. He was picked on by the other rooster who outweighed him by a good 5 pounds. I took him out of pity.

We got home and got the flock settled into their new coop and run and immediately the rooster started to crow, strutting and puffing out his chest. I was glad we chose him, as goofy as he looks right now. He was officially named Top Hat and hopefully will grow feathers again and live up to his name. We have been enjoying his crow in the mornings.

A few days later as I was looking at the 4 hens, I realized that we could house a few more hens for more eggs. This for all that haven't heard the expression is called…chicken math. One is probably too many and a dozen are never enough. So I convinced my Best Half that a couple more wouldn’t be any more work than what we have already.

Off we went to another farm where they had some chickens to rehome. They were about the same age as the ones we had already and all were laying already. So now we have Top Hat and 8 hens in the area. Once again eggs are starting to show up in the nesting boxes. I feel like we have a bit of a farm once again. As for Top Hat, he crows every morning and a few times throughout the day. He is happy and content to be the only rooster and is taking care of his girls making sure they are safe.

As for the flock of 9…..I still have room for a few more…according to my chicken math!