Up North to the Cabin...A Simpler Place in TIme 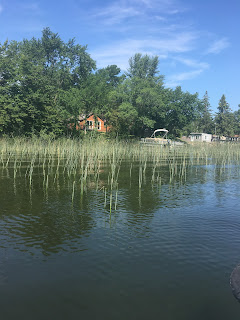 Over the past several months I have taken to looking at the Zillow app for lake cabins and land by a lake that we could buy for what we could afford…like a dollar or two. I have surfed the internet with Zillow and looked at so many properties up North of us that I could become a real estate agent and tell you all the good and bad parts of the properties I have looked at virtually. I’ve looked at just that many.

The really neat thing about Zillow is the virtual tours they have and the satellite photos you can look at. I love to look at the lay of the land on satellite. You can see if it is high ground, marsh or surrounded by swampland. Or even worse, surrounded by mansions and glorious manicured yards.

The past few weeks I found some more remote lakeshore properties, which we can’t ever afford, but it sure has been fun looking at them and daydreaming. One was an old fishing camp with 2 small cabins set back from a small lake. Unfortunately the 4 acres was only about ½ acre that wasn’t swamp and marsh. But looking at the pictures brought me back to a way simpler time in life…summer's up at the cabin when I was a kid.

My parents and a few of my aunts and uncles owned lakeshore property that once was part of the farm they grew up on. My one uncle owned the main land with a typical Minnesota farmhouse, barn, pump house and other outbuildings. They ran dairy cows and some crops.  Another aunt and uncle had a farm on the other side of Grey Eagle and also were dairy farmers.

Our cabin was a one room building, not insulated and no indoor plumbing. The outhouse was out back and water was hauled in with a 5 gallon metal cream can that had a spigot on it. The cabin was partitioned off into a few bedrooms by way of some wire strung across the rafters with curtains hanging down that you could pull closed. There was a kitchen area with a propane stove and a small electric fridge in the corner. And a big round kitchen table off to the other side. And one of my favorite spots, the chairs that sat near the pot-bellied wood stove. There also was a front screened in porch overlooking the lake where you could always hear the waves lapping up on the rocky shoreline. Here was a big overstuffed chair in the corner of the porch where I would sit sometimes and listen to the water hitting the shore and fall asleep for a while, usually with a dog on top of me sleeping. It was some of the best times of my childhood spending Summers at the cabin. It was the only time I got to be a free range kid…you know, no real rules and hardly any boundaries.

For the most part the cabin was surrounded by the lake on the front side and pasture land with dairy cattle grazing all around the one side and back of the cabin. On the other side in later years my uncle Ray had a trailer next door where his in-laws spent most of their Summers. Down the road and across the creek (or crick as it’s called up North) was my Uncle Ed’s farm and more pasture between us. Down the other way along the road were a few cabins from other people and at the very end was Doug and his family who had kids the same age as my brothers and me. And his in-laws Grandpa and Grandma Louie and Clara. They weren't cousins or even relatives. How did non-relatives get to be down the road from us? Well Doug was my dad’s partner on the police force where they both worked. They were as good as brothers and each looked out for the other and their families. So all up and down that dirt road was family and friends. A mile long road where everyone knew you and looked out for each other.

Summers at the cabin were always fun because there were really no boundaries for me, even at a young age of 8 or 9. I could wander around up and down the road looking for agates, or head out to the pasture when the cows were in for milking. Out there my brothers and I would catch big frogs and bring them back to the cabin. Our Grandma Grey Eagle ,as we called her, would skin them and fry the frog legs up in a pan for a special treat for us. And yeah they taste like a sweet chicken. To this day I will choose frog legs over shrimp any day. A casino near us used to have that on their buffet menu on seafood nights. Not only was it good eating, but it flooded my mind with all memories of the cabin. Unfortunately, Covid kind of wiped out the buffet and it hasn’t reopened yet. I keep hoping.

Up at the cabin, I always woke up early with a cow staring in the window chewing its cud. The smell of the cow manure, alfalfa and lake water and the feeling of the sun warming up the cabin in the morning was one of the greatest things ever to experience, even to this day. I would jump up, get dressed, and head with my Zebco fishing pole down to the shore. There I would sit and cast my line and catch big sunfish that would pull my line out to deeper water. And sometimes a big bass or Northern would sink its teeth in my nightcrawler and would break my line, hook, sinker and bobber. And I would watch the unattached bobber swim out to the drop off on the other side of the bullrushes. I would sit on the dock for what seemed like hours with my feet dangling in the water waiting for someone to wake up to take me in the boat. You can imagine my thrill when my day came and my dad told me I could take the boat out by myself. At first it was only rowing and not going out past the rushes where the drop off was, but eventually I got the tutorial on how to start and run the Johnson 5 hp motor on the row boat. It was such an incredible feeling to be zooming with my hair blowing and the water splashing my face. Granted I was still only allowed in front of the cabin and not out in the deeper part of the lake, but it was a feeling of immense power and excitement for a kid about 10-11 years old. Even though the boundaries were set on where I could go, I was free to take the boat anytime and fish…as long as I could be seen from the front porch of the cabin.

In the afternoons I would take my BB gun and go “hunting”. I do admit a few barn swallows lost their lives perched on the electric poles. But I realized pop cans were a better target since I could put them anywhere and shoot the same one until it was too full of holes to hold a BB. I would wander the fields pretending I was on the frontier scouting for buffalo, the black and white Holstein cows were the buffalo. The only concern running through the fields was the electric fence and making sure I didn’t zap myself touching it as I crawled under it. In later years my cousins and brothers would dare each other to touch it. Looking back now after being a nurse for decades…it reminds me of when a patient is cardio-converted…a zap sent to the heart to get it regulated and beating normally. Wonder if any heart trouble was warded off by the electric fence?

My biggest thing I didn’t like back then was the outhouse, I always had a fear of my big brothers locking me in there, or worse dangling me head first over the toilet hole. I would run in there as fast as I could and run out before they knew where I was. Being the only girl with two big brothers sometimes had its disadvantages. But mostly my brothers were always looking out for me whether in the Cities at home, or up at the cabin. And because of them I learned to stand my ground and take care of myself pretty well. I do love those 2 knuckleheads I call my brothers.

I probably will continue to look at Zillow properties on a lake, knowing affording it is a dream, but it sure brings back memories from a simpler time in life up at the cabin. I’ll always remember the family, massive numbers of cousins and aunts and uncles doing a picnic next to the lake, my uncle Al and Uncle Ray playing a polka song on the accordion. And my aunts singing ”roll out the barrel, we’ll have a barrel of fun”. Here’s to that simpler time in life.