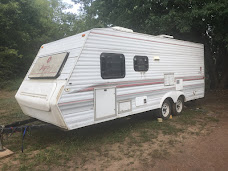 A few weeks ago, we wound up going to Wisconsin to look at a Class A motorhome. After much discussion, we agreed that an RV was our best bet for traveling once my Best Half retires. And that is coming soon, hopefully in just a few months or so.Our plan is to load up the dogs, hop in the RV and leisurely do some traveling cross country. For the past two years we have had a travel trailer that was fine and yet I just couldn’t bond with it and make it feel homey. In fact I nicknamed it the “Damn Camper”, not because anything was terribly wrong with it, but because I just didn’t like towing a travel trailer for a vacation. Just hitching it up to the van caused friction in the marriage, not to mention any backing up with it that had to happen. And worst of all, important things get left behind when you tow a trailer, such as the boat for fishing.

I put an ad in Marketplace on Facebook on Saturday night. And within about an hour of posting messages started charging in. The standard, “Is this still available” to more specific ones like “Does the toilet really work”. And my favorite from a man asking for the fridge measurements. When I messaged back what the dimensions were, he then messaged me back, “No that’s not right. It looks way bigger in the picture”. I then asked him to bring his special tape measure and he could check my work. I never heard back.

One by one, I answered multiple questions and set up times for people to come look at the “Damn Camper” I soon realized that listing something expensive on a weekend is kind of dumb, because most people don’t have that kind of cash lying around their house. And due to so many people messaging me, I decided to not hold the camper, or take any down payments  to hold it. It just seemed that full cash and drive it away immediately  was the way to go in order to not have people showing up just to “kick the tires”. While I am no bull rider or rodeo queen, this isn’t my first rodeo and I have had people promise to come back if I hold an item, only to never hear from them again.

Even though I put in the ad that there would be no holds and it had to be full cash payment, people still messaged me requesting I take their downpayment and keep it if they didn’t return. I hate selling expensive things online. There is just no good way to do it where you don’t have people angry. There just isn’t a good way for people to message you, and set up a time to see it. I mean what if a person says they will come at 5 and you agree, but then another can come earlier. What if the first person buys it and the second person is on their way to look. Marketplace and Craig’s List are set up for the perfect storm. Eventually it will happen that you will have several people angry because you won’t accommodate them and sell to them.

By Sunday night we had several people that said they were going to go to the bank and stop by and pick up the “Damn Camper”. They were all advised that whoever had the money in hand for the full price and was at the house would drive away with it. As much as I wanted to accommodate people it has never worked out to my benefit when I do...at least with selling stuff online. Yeah as much as I hate shopping for stuff, I think I hate selling stuff even worse.

Monday morning came and once again the messages started coming in fast and furiously. There were the “tire kickers”, but there were ones who had the money and wanted to look at it. Again I stuck to the “first come, first served” strategy. Just as I was about to message back a time of 5 pm for a few that were wanting to come, I got a message “I can be there in an hour to look at your camper. I have the full amount of cash if I decide I want it”. I gladly responded to him to come as soon as he could. I said a silent prayer that this person would want the “Damn Camper”.

He showed up within the hour and looked around at everything. All the while he was looking, he was on his phone conducting business. We chatted between his calls and finally after taking a ladder to look at the roof he came down, called his wife, and said he would buy it. All the while my phone was actually overheating with all the messages coming in. I was so overjoyed when the guy handed me the cash and I was able to mark it SOLD.

As the guy hooked up the trailer to his big truck, I took one last look at the “Damn Camper” trying to muster up some type of bittersweet feeling as I watched the tail lights flicker down the driveway. And yep there it was...nothing but the joy of being able to mark it sold. Good-bye “Damn Camper”, hello new RV.