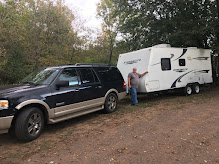 After discussing that more wet and windy weather was coming in, and not knowing how the brakes were going to respond with the C.O.W. hitched up we decided we probably needed to head home in the morning to avoid the weekend traffic and the wet roads and no brakes. Just another chapter in the adventures of our travels. That’s about normal for us.

The next morning we hitched the C.O.W. up to Bid Eddie without a single thought of divorce from either of us. It was the smoothest hitching we ever have had in 42 years. Maybe a couple of old dogs have learned some new tricks over the past years. We had everything stowed away and set out for home. It was a scary and slow drive home. We did finally make it and got unhitched and brought Big Eddie in to get checked out. It turned out the new master cylinder was bad, so a new one has been put in. So fortunate we made it home safe and it was under warranty so there was no charge for the repairs.

We still have a few days before Monday morning work starts for my Best Half. Unfortunately it has been raining and windy most of the time. We have been doing odds and ends around the house getting ready for Winter when it comes. And it feels like it will be sooner than later.

This week after 38 years working at the same company, my Best Half will be letting them know he is going to retire December 3rd, less than 50 days away! The past few months we have been preparing for that moment. We have been finding a way to travel safely and comfortably, and finally we think Big Eddie and the C.O.W. will be the ticket. We have tried to simplify things around here since it is only the 2 of us and the dogs now. We have good neighbor friends down the road who will keep watch on the farm and keep the chickens fed and watered in return for fresh eggs daily. Neighbors looking out for each other is common in Minnesota, and it makes us very grateful for them. I think we are ready for us both to be retired after all these years. Bring it on!