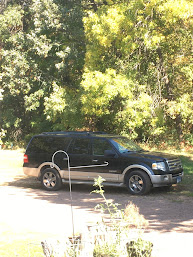 I get teased a lot by family and friends because I tend to sell lots of vehicles and campers and boats and canoes online. Over the past few months, I have sold a vehicle, a camper, an RV, and 2 canoes. I have a tendency to try something and if it doesn’t fit, I sell it so I can replace it with something that will work. My Best Half has always joked that he better remain worthwhile or he will be next to go down the road.

About 2 weeks ago, after discussing our travel plans once we both are retired, we decided we needed to have a different vehicle to pull the new camper. Since we may do some Southern trips in the winter, we would need a 4x4 for sure. And something big enough to haul our 2 dogs with us, a combined weight of about 150 pounds. And something we can put a canoe or kayaks on top. After weighing the pros and cons of truck vs SUV, we decided a large SUV would serve our purpose and be more practical. So we set out to see what was out there in the used vehicle world. There is no way we could afford a new SUV or even a newer used SUV. The price of vehicles has soared in the past year.

After finding several used SUVs and messaging for more info and looking at a few, we decided to thin the search down to looking for a Ford Expedition. They seemed the best fit for what we were needing. So for the next week many pictures and info was exchanged in text messages between me and my Best Half while he was at work. We finally came across a 2007 Ford Expedition that was the Eddie Bauer extra long style. We went to look at it and it seemed like it was in great shape and had been well taken care of. And the big bonus was it was an Iowa vehicle and had very minimal rust. Minnesota vehicles oftentimes are pieced together with Gorilla Tape over the rusty areas. The engine sounded good, no check engine lights were on and we decided this was the one. And so the MInnesota Nice negotiations had begun.

I offered the owner a price that was considerably lower than what they were asking and then waited for his counter-offer… and waited a little longer. I started feeling a little uneasy with all the silence that was happening. Maybe I had insulted him with the low price. Finally, to my surprise, he agreed to the price I had offered. I’m still not sure he agreed to it because of the uncomfortable silence or he just wanted to be done selling it. But a few minutes later, he was signing the title over and I was paying him the price.

And off my Best Half drove home with “Big Eddie”, our new SUV.We got home and I cleaned it all over from the dashboard to the carpeting. When I was done, “Big Eddie” looked brand new. Next would be the transfer of stuff from the van to the camper and “Big Eddie”. When we traveled to Spokane a few weeks ago I left all the camping gear and stuff in the van. And while the van had incredible storage under the bed, the SUV was a little more limited and stuff would be out in the open more.

Realizing that “Big Eddie” didn’t have the storage for small stuff we had kept in a drawer up front in the van, I was going to have to get creative with the stuff I liked to keep close at hand in the front. I put the first aid stuff in the glove compartment, figuring that needed an easy access spot. Extra phone cords, masks and hand sanitizer fit into the center console. That left me with the trip log book, some pens and a notebook, a place for my phone and a place for the hunting knife I use to cut fruit and snacks up with. I made a long thing with pockets out of fabric and cardboard to put my stuff in and then bungeed it to the console.  A perfect fit.

So, with everything moved out of the big blue van, I was able to clean it and take pictures to post it for sale on MarketPlace. While we both had a reluctance to sell the van, we knew we needed to do just that. We now had “Big Eddie” to haul us around with the camper. If a quick cross country trip was needed, we can always put a mattress in the back or cram into the minivan. But with retirement the hope is to travel slower and pull the trailer.

As we were coming home from the car wash with the van, we both had time to remember all the fun travels that van has brought us. We easily, over the years, have put on 30,000 miles of road trips across the United States. Trips to Big Bend National Park in Texas, a few through the SouthWest,  some to North Carolina and Louisiana, and out west just a few weeks ago. So many happy memories and people we met along the way. One time, we even met Lorreta Lynn’s niece in Butcher Holler, Kentucky. We sat on the log cabin porch and chatted away about nursing and how her daughter was in nursing school. So yeah, lots and lots of great memories.

But not being able to keep more vehicles than we need, the van was listed for sale. And as usual within a few minutes of listing the van, many messages started coming in. About 15 in the first 20 minutes and all wanted to come look at it. So one by one I replied to all of them telling them I would let them know if it sold before they could make it out to look at the van.

A guy planned to come out and look at it right away when my Best Half was home too. I won’t sell any vehicles without him there. He knows the mechanics and ins and outs of all of our vehicles.He knows everything we have had repaired and will be honest if there is something wrong. As for me...I can tell you how much gas is in the tank and if there is a sticker on the windshield, I  can tell you when the oil was last changed.

The guy came and did the usual kick the tires and then listed everything that was wrong with it. It had some rust, did the CD player really work? And our favorite was when he said it rattled when he closed the side door. He proceeded to open the side door and slam it shut, but no noise. He did it again several times, had his friend slam the door while he crawled under the van. No rattling noted. I then said there probably were some rattles as it is a 1999 model. Heck, I sound like a bowl of Rice Krispies when I get out of bed in the morning. My body goes Snap, Crackle, Pop. He didn’t find the humor although his friend did. He needed to think about it and off he went. Another person came a few minutes later and wanted it, but didn’t have the cash so we said check back tomorrow if it's still listed. He drove off and we went in and ate supper and waited for the next person.

The next person came with her friend and took it out for a test drive. By now it was getting late and the sun was going down. We waited and waited for her to return with the van and finally after a long test drive she came up the driveway. She had taken a turn and had gotten lost on the back roads. She had a few questions and then decided she wanted it. And so the big blue van was headed down the driveway to its new home, hopefully ready for new adventures and to make new memories with the new owner. I so hoped it was just what she was looking for and wanted.

The past few months, we sold many things that have served us well over the years. And while there have been choices and changes made, that we both have agreed needed to happen, it has been kind of bittersweet. I have come to realize it is not so much the changes we’ve been making, but more the reason for the changes we have been making that have left me kind of reflective. They have been more to accommodate us as we age. Changes that hopefully will make our lives easier as we move a little slower and find pleasure more in the journey, rather than the journey’s end.

In our 30’s and 40’s it was tents and bouncing down the road in a 1 ton rusted up old van with the 4 kids and dogs.We would drive 14-15 hours a day just to hurry up and get to our destination. We would drive through the night watching for deer on the road and being thankful when we pulled in at the end we were safe from roadkill.

And now? The luxury of an SUV with incredible fill suspension pulling our home behind us with all the things we need tucked in it, we both are ready. As for driving 14 hours a day, we are ready to trade it in for stopping before dark. We still will be watching for deer on the road. You know you have a higher chance of hitting a deer here than being audited by the IRS. After all, this is Minnesota.